Long-term, Bauen will be humanity's enabler for a cleaner, more sustainable Earth

Since 1970, GDP growth as well as median real income growth rate have slowed. This is no secret and it is known by a majority of folks in the economic community. One of the reasons for this is lack of technological innovation. We were once promised flying cars and bases on the moon but the current reality we live in is more that of a very conservative one. The promised views of Kubrick’s A 2001: A Space Odyssey are now replaced by the earnest efforts of technology companies deploying Stanford PhDs to develop ad targeting algorithms.

This conservative technological innovation, although greatly increased productivity in certain areas of the economy has left others in a drought. In making this claim, it is important to divide up the innovation we are talking about in two forms: public vs private. Public goods, as they are termed, include things like railroads, running water and electricity. On the other hand, there exists private goods which have seen a great deal of innovation. Those are our faster email clients, broader social media platforms and slightly faster internet speeds. Although both impactful and beneficial for the human race, public goods simply change the way we fundamentally live our lives.

When the music stops playing . . .

It is also worth making note of when the economy falters, in other words, goes into a recession. The 2008 recession also known as the crash of the US housing market left the real estate industry, among others, in ruins. A common metric by economists in helping understand what caused this economic collapse focuses on factors such as mortgage rates and the decline of homeowner payments. But it is interesting to note the while this “housing bubble” was beginning to build up pressure a few years before it burst, a simultaneous crisis not much talked about was also impending. 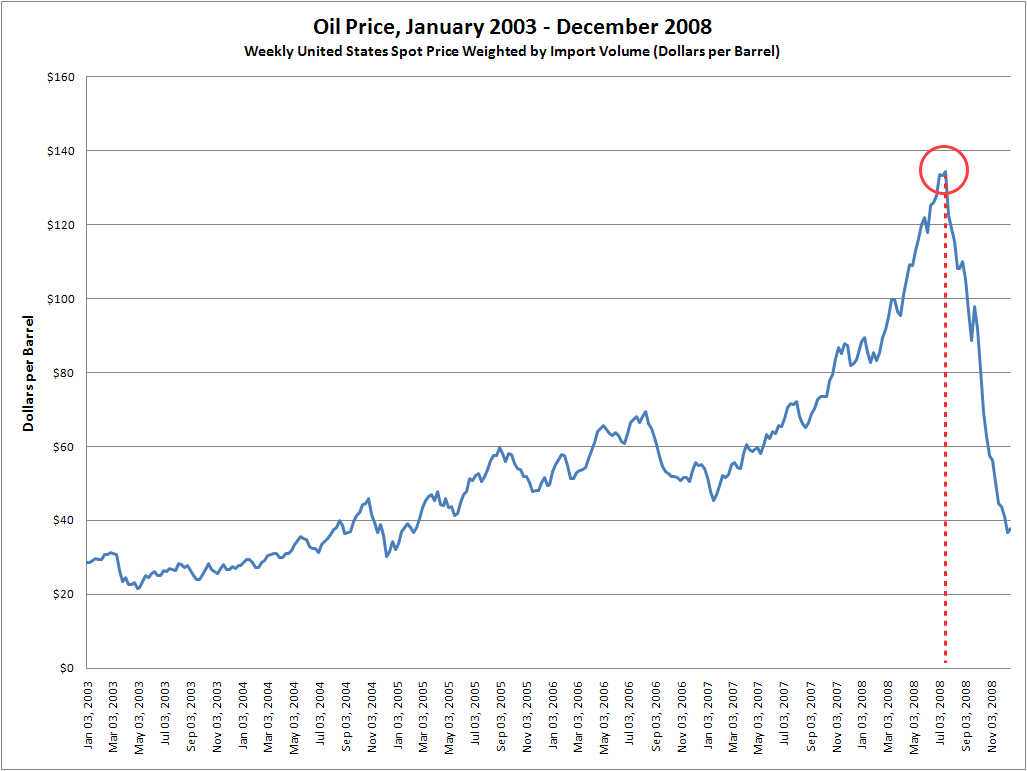 However, this sort of reliance can lead to economic challenges when the price of oil goes too high. When the price of oil increases, so does the price of these essential goods. The result is a decrease in purchasing power by citizens because prices go up while their income does not. In fact, this is what happened in 2008. During the mid-1980s to September of 2003, the inflation-adjusted price of a barrel of crude oil was around $25/barrel. In the span of a few decades the price rose to $60 by 2005 and peaked at a whopping $147 by July of 2008, the same year as the financial crisis. What followed afterwards was not only a tighter overwatch on our housing industry but also a re-evaluation of our nation’s energy use.

A conversation on energy often leads to a discussion regarding climate change. The productivity gains during the Industrial Revolution were led by the burning of coal, oil and natural gas. This unfortunately has led to dangerous build up of CO2 in the Earth’s atmosphere. This sort of “entropic debt” where more is being flowed into the environment than what is being used has led to a massive shift in the climate of the Earth.

A good metric to measure the impact of our climate is through the carbon dioxide level. In the history of humanity, never has the carbon dioxide level exceeded 300 parts per million. However, in 2013 a study led by university researchers in Switzerland had found that the current level of CO2 in the air stands at a whopping 400 parts per million. [1]

A more tangible data point is the increase of major hurricanes in the United States. Tropical cyclones and severe hurricane events account for $1.75 trillion in damages in the United States alone. These extreme weather related damages have undergone the largest increase since 1980, due in large part by climate related factors. More recently in 2012, Hurricane Sandy devastated the Eastern seaboard destroying 650,000 homes and leaving 8 million residents without power [2]. The National Oceanic and Atmospheric Administration estimates Sandy caused at least $70 billion in damages, among the costliest in US history [3].

The most beautiful aspect of the internet is its ability to provide access regardless of race, religion, economic background or creed. Anyone with a stable internet connection can have the world’s largest encyclopedia at their fingertips (Google+Wikipedia). Or share their music for the world to see (YouTube + SoundCloud). And even learn programming, start a company and grow for free (Codecademy, Stripe, Facebook). What previously required large record companies to create and share music now requires an email address, some time and a bit of passion. Yes this has resulted in more competition and more work required to stand out, but it cannot be denied the amount of immense leverage that the internet has allowed anyone on the planet to have access too.

The decentralization of what previously was concentrated in the hands of a few elite has allowed for major progress to occur in the world of bits. However, the same level of decentralization seen in information has not been seen in the world of energy, a significant public infrastructure good. Instead, the concentration of energy generation and consumption has been controlled by a few given entities not accessible by the average citizen. But what if the same leveling factor that occurred with information thanks to the internet and communication technologies was applied to the densely pact and hard to reach world of energy?

The most important problems that we’ve considered in this essay include: little to no progress in important infrastructure goods leading to slow GDP growth, reliance on oil and fossil fuels leading to significant impacts on our climate and weather and finally the centralization of energy generation and distribution resulting in the inability to choose how one generates and obtains their energy.

To solve these problems, Bauen will make the necessary energy tools to enable mankind to rapidly progress towards a cleaner, more sustainable Earth. These are ambitious goals filled with hard problems. But we understand the power of small steps. Big things have small beginnings. If you choose to use our products, be an investor or share our mission, we thank you for starting small with us .